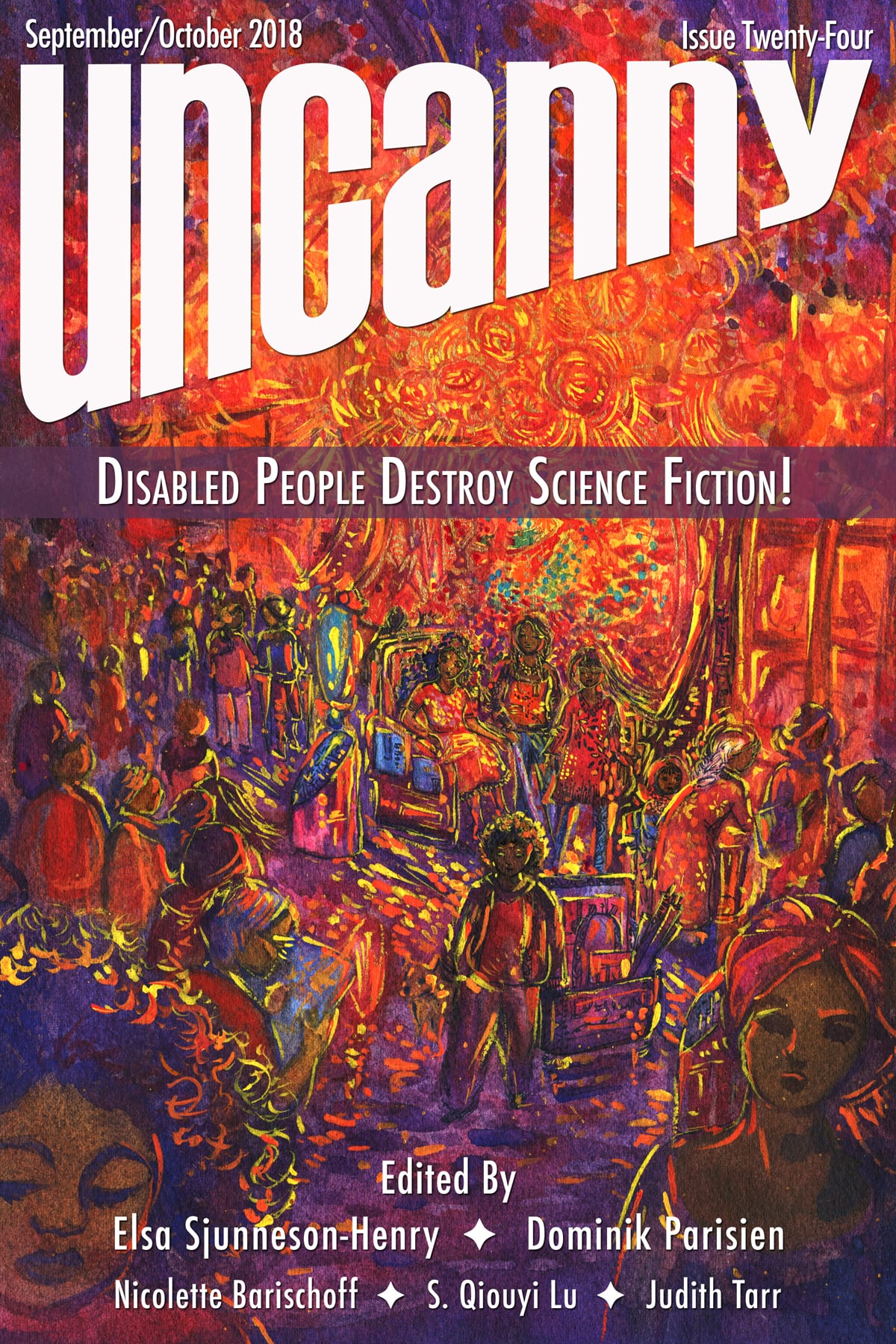 Look at your bookshelves. Think of the imagined worlds in those books, of the adventures they have allowed you to experience on distant planets, in faraway lands, in the spaces between. In those stories, do you exist?

For many people, the answer is no. When writers draw on older works as inspiration for their science fiction and fantasy, their own writing often uncritically reflects the worlds, the biases, the politics, and the representation of those that came before. If a symbol could represent certain parts of the science fiction and fantasy genre, it might be the ouroboros: the serpent eating its own tail, which can signify infinity or devouring one’s self. That is often the paradox of our field. There is a hunger for the new, but when something seems to skew too far from the familiar, backlash occurs.

I recently co-edited Uncanny Magazine’s Disabled People Destroy Science Fiction with Elsa Sjunneson-Henry, the latest edition in the guest-edited Destroy! series. Destroy! was initiated in 2014 precisely because of that sort of backlash: some men in the sci-fi and fantasy communities felt women weren’t writing real science fiction, that their stories were in effect “destroying” what they understood to be the genre. Later, the series grew to encompass fantasy and horror and extended to other marginalized demographics – namely queer people, people of colour, and now disabled people. When a story, novel, or film showcases one of those perspectives, privileged and often represented members of the community can invariably be trusted to protest, seeing as such things were largely absent in previous works. Rather than approaching the presence of those demographics in new narratives as the natural expansion of the field – as an element of world-building or simply as a representation of the diversity of humanity – they see it as a negative politicizing of the stories and the genre.

I have edited or co-edited a variety of anthologies, and while all of my books are consciously intersectional, Disabled People Destroy Science Fiction is by far the most overtly political and the most personal. Science fiction has a poor history with disabled people. From eugenics to cure narratives, we are often ill-treated in the genre. There is little recognition of disability as a community, or an experience, and disability is simply treated as something to be resolved, cured, removed – if it features in those narratives at all. As soon as we opened Disabled People Destroy Science Fiction to submissions, some folks complained about the project being unnecessary, claiming that disabled people are not seriously marginalized or under-represented. Internally, the difference was telling. In their cover letters, submitters expressed such joy at the project, at seeing their stories and those of people like them featured prominently. They articulated the need for such undertakings, and the hope that more would follow. Many readers, some disabled and some not, have also reached out with enthusiasm. That is the future of science fiction and fantasy we need, where publishers and editors actively seek out new work, bring in perspectives historically ignored, maligned, and erased from previous narratives. It revitalizes the genre, demonstrates its relevance, its imaginative potential.

Such publishing opportunities are not without risk, though. Projects like the Destroy! series are a valuable addition, but they do risk further marginalization of specific demographics. They must be a showcase, a way of focusing the attention for a moment, a prism through which to shine a light on the field. They must not be seen as a solution for the absence of those perspectives elsewhere.

The concept of absence extends to the editorial staff. While it is true that more publishers are placing specific calls for historically marginalized perspectives in their general submissions, it does not mean those stories are necessarily given fair consideration. Editors and publishers unfamiliar with a demographic’s experiences and challenges can end up unintentionally publishing clichéd or harmful narratives about that very group. With Disabled People Destroy Science Fiction, the entire staff identifies as disabled. We were able to bring in a range of experience and knowledge in our editorial approach, and it allowed for a more nuanced and collaborative process, with the ability to build off each other and strengthen the project as a whole. In the material we selected, we chose writing by disabled authors in which disability might be a main aspect of the story, visible but not a focus, or even tales in which it didn’t feature at all. Our goal was to spotlight the perspectives of our authors, and disability necessarily informs that perspective even when it isn’t the main theme of the work.

It can be easy to talk about the diverse future of science fiction and fantasy, to discuss directions we expect it to take, specific challenges, stories we want to see, but one of the most effective ways to ensure a variety of perspectives are available to readers is not only to publish diverse writers and stories, but to ensure that the editorial staff reflects that diversity as well.

Dominik Parisien’s fiction, poetry, and non-fiction has appeared in publications such as The Fiddlehead, Plenitude, and Wordgathering. His poetry chapbook, We, Old Young Ones, is forthcoming from Frog Hollow Press through its Dis/Ability series. He is also the co-editor, with Navah Wolfe, of Robots vs Fairies and The Starlit Wood: New Fairy Tales, which won a Shirley Jackson Award. Parisien is a disabled, bisexual French Canadian, who lives in Toronto.