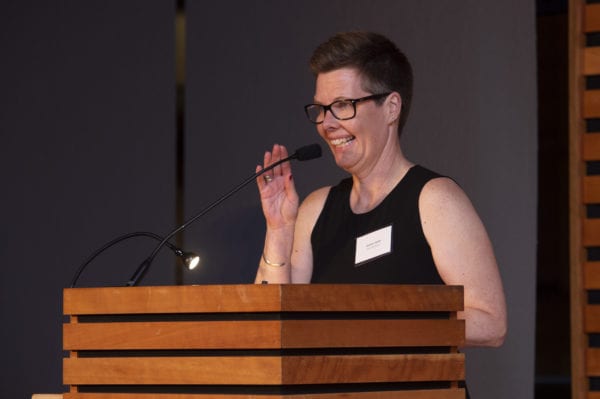 The Canadian Children’s Book Centre and TD Bank threw their annual children’s literature awards gala on Oct. 15, with a new host and some kidlit heavy hitters. While the event is usually hosted by Shelagh Rogers, this year the role went to Paul Sun-Hyung Lee from the CBC TV show Kim’s Convenience. He spoke of not having a lot of books at home when he was a child, but eventually falling in love with Roald Dahl’s James and the Giant Peach.

Waterloo author Heather Smith won the biggest award of the night – the $50,000 TD Children’s Literature Award – for her middle-grade novel-in-verse Ebb & Flow. Recent Governor General Literary Award winner Jillian Tamaki, of Toronto, won the CBC Fan Choice Award (the winner of which is voted by kids) for They Say Blue and bestselling Windsor author Christopher Paul Curtis picked up the Geoffrey Bilson Award for Historical Fiction for Young People for The Journey of Little Charlie. Curtis actually went to the podium twice: once to accept his award and then later in the evening he came to the stage again to thank his wife, who he forgot to mention the first time up. “There’s always that one idiot at the show who forgets to thank the most important person,” he told the crowd. “Well, tonight that idiot is me.”

After the awards, Heather Smith told Quill & Quire: “I’m feeling exhilarated – this is the biggest award in Canadian children’s literature. When I think that my book is the book it’s kind of amazing. To have it here as a nominee is huge and to have it win is surreal.”

Smith originally intended Ebb & Flow as a picture book, but she just kept writing and writing in verse. “As a former reluctant reader,” says Smith, “this [book] would have been awesome for me. With so much white space on the page, you can really think you’re accomplishing something: ‘Whoa, I just read five pages of a book.’ That is something I didn’t experience as a kid as a non-reader. I am hearing feedback from teacher-librarians that kids who don’t normally read are reading it quickly and are proud that they’re reading it quickly – and they’re still getting a meaty emotional story.”

After the ceremony Smith reflected on the fact that she used to come to these awards as a member of the Canadian Children’s Book Centre. “To be an aspiring writer in this venue and this community and watching people be nominated and winning awards, it makes you go home and think, ‘Maybe, maybe someday.’ You just have to keep going and keep writing.”

The full list of the 2019 TD Canadian Children’s Literature Awards: