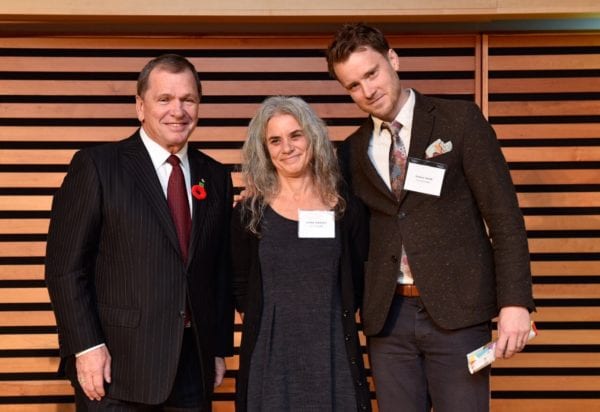 Author Joanne Schwartz and illustrator Sydney Smith accepted the TD Canadian Children’s Literature Award on Oct. 29 – at the Canadian Children’s Book Centre gala – for their much-lauded Town is by the Sea (Groundwood Books). The picture book already won the Kate Greenaway Medal for Smith, is a Boston Globe–Horn Book Honor Book, and was named a best book of 2017 by Quill & Quire, the New York Times, and many others. This latest recognition, awarded by the CCBC and sponsored by TD, comes with a $50,000 – the largest cash prize in Canadian children’s literature.

Both Schwartz and Smith are from Nova Scotia and spoke of their connection to the book’s subject matter: life in a coal-mining town in Cape Breton. “I wrote with great intensity and great intention about the rugged corner of the country that has a working class history and through this boy hoped to tell something of that story,” said Schwartz, during her speech. “It’s about the children who wonder every day if their fathers are going to come home from the mine. I wanted to write of the community bound together with this history. It’s an ode to that.”

Smith gave an emotional speech, giving credit to the third creative collaborator in this project. “This book is a beautiful testament to the mystical abilities of Sheila Barry [the late publisher of Groundwood]. She meant so much to many of us, and as we get closer to a year since we lost year her I think a lot about what she meant to me. As a creator you can worry about pleasing kids, teachers, reviewers, parents, judges, your peers or if you have someone that you trust and that you share a vision with you can just focus on them and everything else falls into place. That’s who she was for me and many others.”

More awards were given out at the event, which took place in a new venue, the Bram & Bluma Appel Salon in the Toronto Reference Library. Six-time host Shelagh Rogers noted how appropriate it was that in this space they were literally “surrounded by marvellous books.”

The other big award of the night, the CBC Fan Choice Contest, voted on by kids age 5–12, went to Barbara Reid for Picture in the Sky (Scholastic).

Next up, TD and the CCBC will honour the best in French-language children’s literature at second gala in Montreal, on Nov. 19.