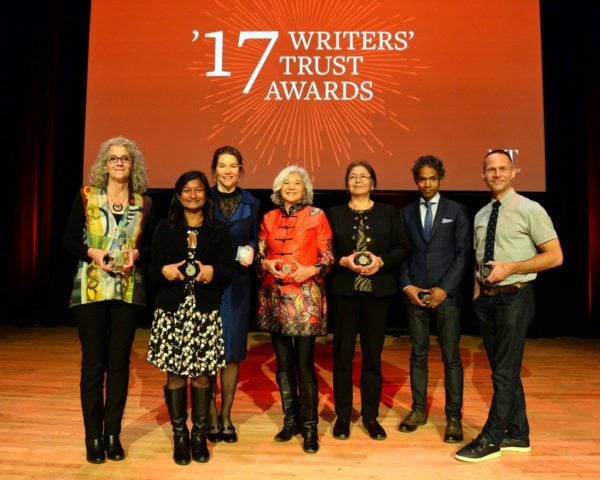 The Writers’ Trust made it a night for honouring women at its annual awards ceremony in Toronto on Nov. 14. All four prizes for a body of work were presented to female authors, though the night’s two marquee awards – the Rogers Writers’ Trust Fiction Prize and the Hilary Weston Writers’ Trust Prize for Nonfiction – went to men.

David Chariandy won the fiction prize for his sophomore novel, Brother (McClelland & Stewart). The book, about a family of Trinidadian immigrants in the Toronto suburb of Scarborough, was also longlisted for this year’s Scotiabank Giller Prize. Chariandy took home the $50,000 purse, which was increased from $25,000 for the first time this year.

From the stage, Chariandy thanked the “quiet heroes” at the Writers’ Trust for the assistance and support they provide to authors across the country. He noted that his book is dedicated to Austin Clarke, who won the inaugural Rogers Writers’ Trust Fiction Prize 20 years ago for his novel The Origin of Waves. “In accepting this award, I would like to acknowledge, with profound gratitude and respect, the work and struggles of our elders,” Chariandy said.

James Maskalyk, a physician, activist, and University of Toronto assistant professor, won the $60,000 non-fiction prize for Life on the Ground Floor: Letters from the Edge of Emergency Medicine (Doubleday Canada), about the exhilaration, tragedies, and emotional upheavals of treating emergency-room patients around the world.

Maskalyk was one of five shortlisted authors for the Hilary Weston prize. The others were Ivan Coyote for Tomboy Survival Guide (Arsenal Pulp Press); Kyo Maclear for Birds Art Life (Doubleday Canada); Carol Off for All We Leave Behind: A Reporter’s Journey into the Lives of Others (Random House Canada); and Tanya Talaga for Seven Fallen Feathers: Racism, Death, and Hard Truths in a Northern City (House of Anansi Press). This year’s jury comprised Susan Harada, Arno Kopecky, and Siobhan Roberts.

“Well, that’s surprising,” Maskalyk said after taking the stage. In accepting his award, Maskalyk suggested he would employ one of the secrets of emergency-room doctors he writes about in his book: “It’s okay to panic, but you must do it on the inside. … Hopefully I’m doing okay.” Before he left the stage to return to the trauma unit at St. Michael’s Hospital, where he was on call, Maskalyk added one of the night’s grace notes: “Thank you very much. I hope I don’t see any of you tonight.” (Both Maskalyk and Chariandy thanked Martha Kanya-Forstner, editor-in-chief of M&S and Doubleday Canada, who edited both of their winning books.)

But the rest of the night belonged to a succession of accomplished women.

Novelist, short-story writer, and memoirist Diane Schoemperlen won the $25,000 Matt Cohen Award, given to a writer who has devoted their life to the craft without recourse to the luxury of a day job. The jury, composed of former publisher Patsy Aldana, writers Graeme Gibson and Wayne Grady, and former Writers’ Trust executive director Don Oravec, stated that, in her long and lauded career, Schoemperlen “has dissected not only genres but words themselves.”

Schoemperlen says the call from the Writers’ Trust came out of the blue, as she did not have an eligible book out this year. “I was just kind of sailing on through prize season,” she says. “It’s a hard season, when you have a new book that’s eligible, and I was just happily an innocent bystander.” Schoemperlen says the validation that accompanies the recognition is real, especially given the increasing difficulty of making one’s primary living as a writer. “I feel like I’ve been pretty successful. But there are always times when you feel like, ‘Have I wasted my life?’ Something like this is a really good reminder that, yes, I have done some things.”

The award has a special meaning for Schoemperlen, who was friends with Cohen. It was Cohen who introduced Schoemperlen to her long-time agent, Bella Palmer. “It’s very emotional for me and [Palmer],” Schoemperlen says. “She used to call me her third daughter. And that was because of Matt.”

The $25,000 Writers’ Trust Engel/Findley Award, given to a writer in mid-career, was presented to Vancouver novelist Billie Livingston. The author of four novels (most recently 2016’s The Crooked Heart of Mercy), as well as short fiction and poetry, Livingston’s “masterfully crafted” work was praised for its “pure light that cuts through the darkness and leaves us laughing … in the face of the most difficult truths.” The Engel/Findley jury comprised writers Katherine Govier, Alexander MacLeod, and Eden Robinson.

“It’s a pretty amazing phone call to get,” Livingston told the crowd at the award ceremony. She said the award felt appropriate for her, since she shares with Marian Engel and Timothy Findley an affinity for irony and sly humour. Livingston added that the approbation of one’s peers is more important than the money or the number of books a writer might sell. “It’s the writing that matters, not the numbers,” she said.

The Latner Writers’ Trust Poetry Prize, worth $25,000, went to Louise Bernice Halfe, a Cree poet from Saskatoon, whose four collections of poetry focus on her time spent in a residential school and the ongoing fallout from the Truth and Reconciliation Commission. The jury of poets Alice Burdick, Soraya Peerbaye, and Gregory Schofield called Halfe “an extraordinary storyteller.”

Halfe says that her first reaction upon hearing about the award was, “Who, me?” The recognition is particularly significant coming in a year that has seen Jordan Abel win the Griffin Poetry Prize and a greater appreciation afforded to other Indigenous writers. Halfe is especially enthusiastic about the calibre of Indigenous poetry that is asserting itself. (Latner juror Schofield won the same prize last year.) “What I’m observing is that although there are a lot of fiction writers out there in the native literary industry, poetry is making a strong entrance into the literary environment.”

Another Indigenous writer – Ruby Slipperjack of Thunder Bay, Ontario – took home the $25,000 Vicky Metcalf Award for Literature for Young People. Slipperjack is “a trail-breaker in the field of Indigenous literature,” state jurors Deirdre Baker, Richard Van Camp, and Marthe Jocelyn. The author spoke of the pain she experienced revisiting her time in a residential school while writing her book Dear Canada: These Are My Words, which she called the most difficult book she’s ever written. “Believe me, I had nightmares,” she said.

The $10,000 Writers’ Trust/McClelland & Stewart Journey Prize for a work of short fiction by an emerging writer went to Sharon Bala for her story “Butter Tea at Starbucks,” originally published in The New Quarterly. Jurors Kevin Hardcastle, Grace O’Connell, and Ayelet Tsabari selected the winner from a shortlist that also included Darlene Naponse for her story “She Is Water.” A third nominee, Richard Kelly Kemick, was disqualified last month after “serious concerns” were raised about similarities between his story and a story by the American writer Amy Hempel.