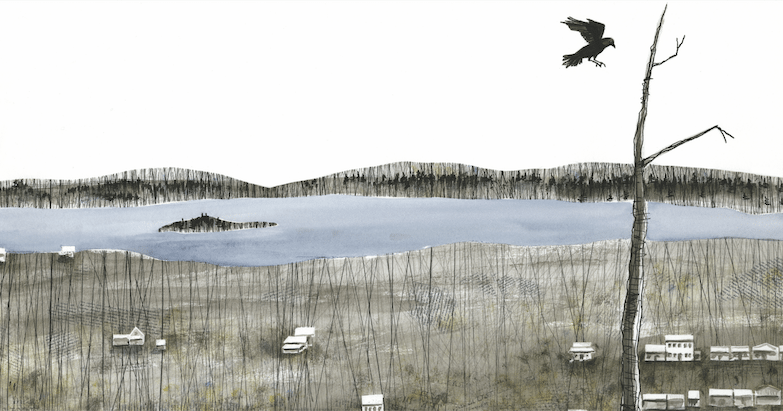 While browsing her local independent bookstore in 2011, Nancy Vo had an “aha” moment. She had just discovered Jon Klassen’s bestseller I Want My Hat Back: “I was floored and thought, ‘How did a picture book just do that to me?’ It sealed the deal – I was on a path to making kids’ books.”

Vo’s debut, The Outlaw (Groundwood Books, May), has a bit of that Klassen feel – muted palette, dark storyline, moody atmosphere – but with a happier ending. In the set-up, the residents of an Old West town are living in fear of a mysterious man known only by his trail of misdeeds. Seasons pass, and “the town was a shadow of itself in need of repair.” When a stranger takes it upon himself to fix what needs fixing, he’s soon identified as the outlaw.

The character is modelled after Eli Sisters – from The Sisters Brothers by Canadian-born author Patrick deWitt – who decides to start fresh after a life of violence. Around the time she was reading the novel, Vo watched the Coen brothers’ film True Grit and attended her first Society of Children’s Book Writers and Illustrators conference, with an all-star lineup that included Mac Barnett, Tomi Ungerer, and Sophie Blackall. With all those “percolating influences,” she sketched out a shadowy figure looming over a railroad track heading toward a distant town. The Outlaw was born.

Vo began researching the setting of The Sisters Brothers, 1850s Oregon and California at the height of the Gold Rush. What she learned can be seen in The Outlaw’s illustrations: among the pen and watercolour are acetone transfers, which allowed her to transpose period textile patterns, bottle labels and reprinted newspaper clippings.

She sent a picture-book dummy to Groundwood, whose parent company, House of Anansi Press, published deWitt’s 2011 novel. After months in the slush pile, Vo got the call. “Sheila Barry took a chance on me, a complete unknown,” says Vo of Groundwood’s publisher, who passed away in November. “I miss her.”

Groundwood art director Michael Solomon calls Vo’s work calm and contemplative. “There is something serene and authoritative about the presentation,” he says, “as though it is mediated through the long-gone voices of the frontier and the West: the preacher, the teacher, the Bible, the law, the homesteader, and the rancher.” He likens The Outlaw’s gentle tone to the works of author-illustrator Leo Yerxa; the haunted, historical matrix to author Paul Yee’s Ghost Train; and the directness to illustrator Morteza Zahedi.

Born in Calgary and living in Vancouver with her husband and two daughters, Vo has a double bachelor’s degree: one in fine arts with a minor in chemistry and the other in architecture. She currently spends four days a week as a facility planner. The fifth workday – along with late evenings – Vo dedicates to picture books. She’s finished a companion to The Outlaw, called The Ranger, and plans a third, The Priest. But Vo is uncertain what will follow. “Ideas seep in from many places,” she says. “Letting myself be open to being inspired by those ideas is the key.” Another trip to her local bookstore may be just the place to start.