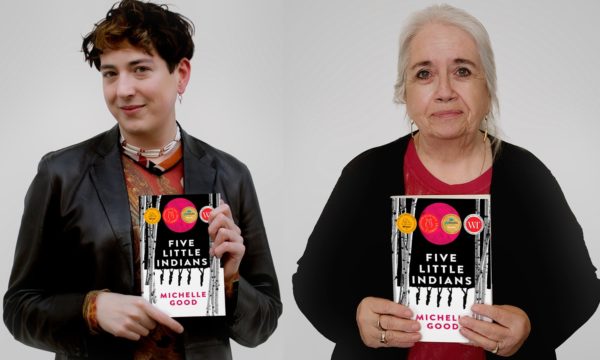 Five Little Indians (HarperCollins Canada) was one of 15 titles shortlisted for this year’s annual battle of the books. In the five-book debate that took place this week, Good’s novel was championed by Ojibwe author and Vogue fashion writer Christian Allaire. The other contenders were Life in the City of Dirty Water by Clayton Thomas-Müller; What Strange Paradise by Omar El Akkad; Washington Black by Esi Edugyan; and runner-up, Scarborough by Catherine Hernandez. Five Little Indians won in a 4-1 vote in Thursday’s finale.

Allaire argued that Good’s book best fit this year’s theme of “one book to connect us.”

“I think a lot of Canadians struggle with reconciliation. They need something to do about it,” Allaire said during Thursday’s finale on CBC. “You can read this book and the best thing you can do is just understand. That’s an easy first step we can all take.”

“The awards are nice and are deeply satisfying as an author but most important to me, awards elevate the profile of the book so more hearts and minds are exposed to the story that I felt compelled to tell,” said Good after her novel won the annual battle of the books on CBC.  “I wrote this book to expose the truth of intergenerational trauma, and how there is so little support in Canada for survivors to truly be able to heal, both on an individual level and at a community level. The primary relationship in this country is the one between Indigenous people and the rest of Canada, and this relationship must be reconciled before we can really consider Canada the country we want to be.”

The Canada Reads win is the latest in a string of accolades for Five Little Indians. Good won the 2020 Governor General’s Award for English-language fiction, the Amazon Canada First Novel Award, and the Kobo Emerging Writer Prize for Literary Fiction.