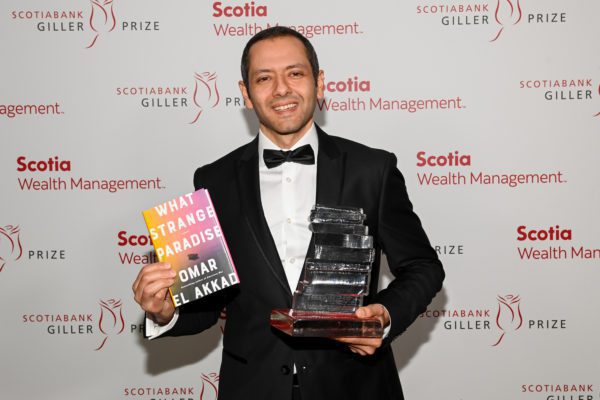 As he accepted the award, a shocked El Akkad said he “didn’t think I had a chance in hell of winning this, and so I’m making the speech up as I go along.”

“For the past few months, I’ve had the incredible honour of being mentioned in the same breath as four outstanding authors, any one of whom could be standing up here. It is the greatest honour of my career,” he told the audience at a live gala in Toronto on November 8. “I am deeply grateful to everybody at Scotiabank and the Giller Prize for making this happen under such difficult circumstances.”

What Strange Paradise, the former Globe and Mail journalist’s second novel, examines the refugee crisis and the sociopolitical circumstances that have created it by telling the story of a young boy who washes up ashore on a Mediterranean island with a number of other refugees, and survives.

In their citation, the jury, comprised of  chair Zalika Reid-Benta, Megan Gail Coles, Joshua Whitehead, Malaysian novelist Tash Aw and American author Joshua Ferris, lauded the book for painting “a portrait of displacement and belonging that is at once unflinching and tender.”

“In examining the confluence of war, migration and a sense of settlement, it raises questions of indifference and powerlessness and, ultimately, offers clues as to how we might reach out empathetically in a divided world,” they wrote.

The other finalists were awarded $10,000 for their shortlisted titles: